This article will discuss some of the theoretical and philosophical boundaries of the artist. In later articles I will discuss whether or not the vocation of an artist can be deemed a calling.

Most of the mainstream thinking about an artist in Eastern culture seems to be that an artist has inherent value in that he or she expresses beauty. To Christian this value seems paramount in that it suggests honoring and extolling God by admiring the beauty of His creation).

But what is an artist such as myself to do?

Where does my work fit in?

Does it honor God?

Most of my work may not be considered particularly beautiful.

This painting directly ABOVE for instance: is one of my most controversial ...

because I show Jesus vomiting. 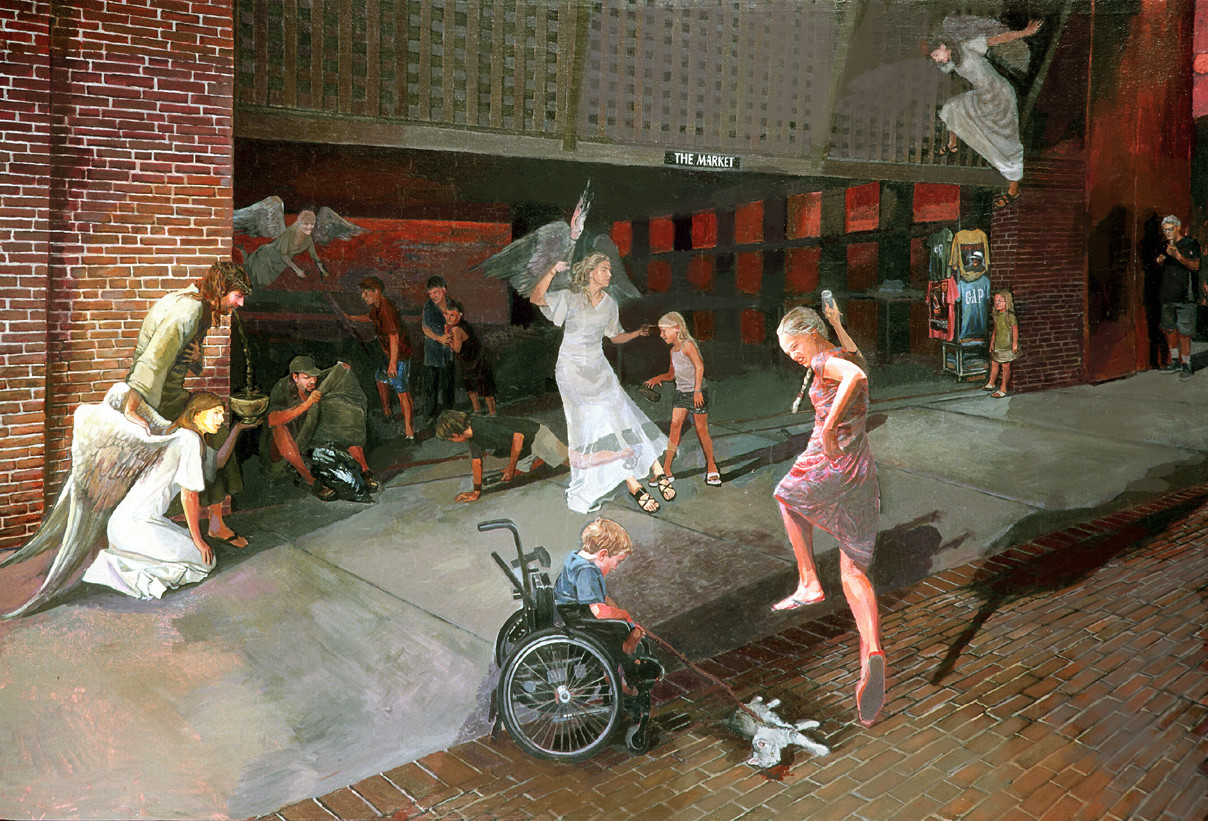 But in our culture (where people now have the average attention span of a goldfish...) I often find myself begging people to take the time to understand an artists' true motivations and the context of the narrative before judging.

The narrative above--shows Jesus vomiting because little children are ganging up to attack a homeless man.

Many OTHER examples of my work are---principally comical or (to use a horribly overused term- “whimsical”). It can also be considered serious, thought provoking, sarcastic, challenging, complicated, but rarely beautiful.

TITLE: John was Overly Indoctrinated into the iDea of being One with all Things and Believed Himself to be the Biological Father of the Baby Bear 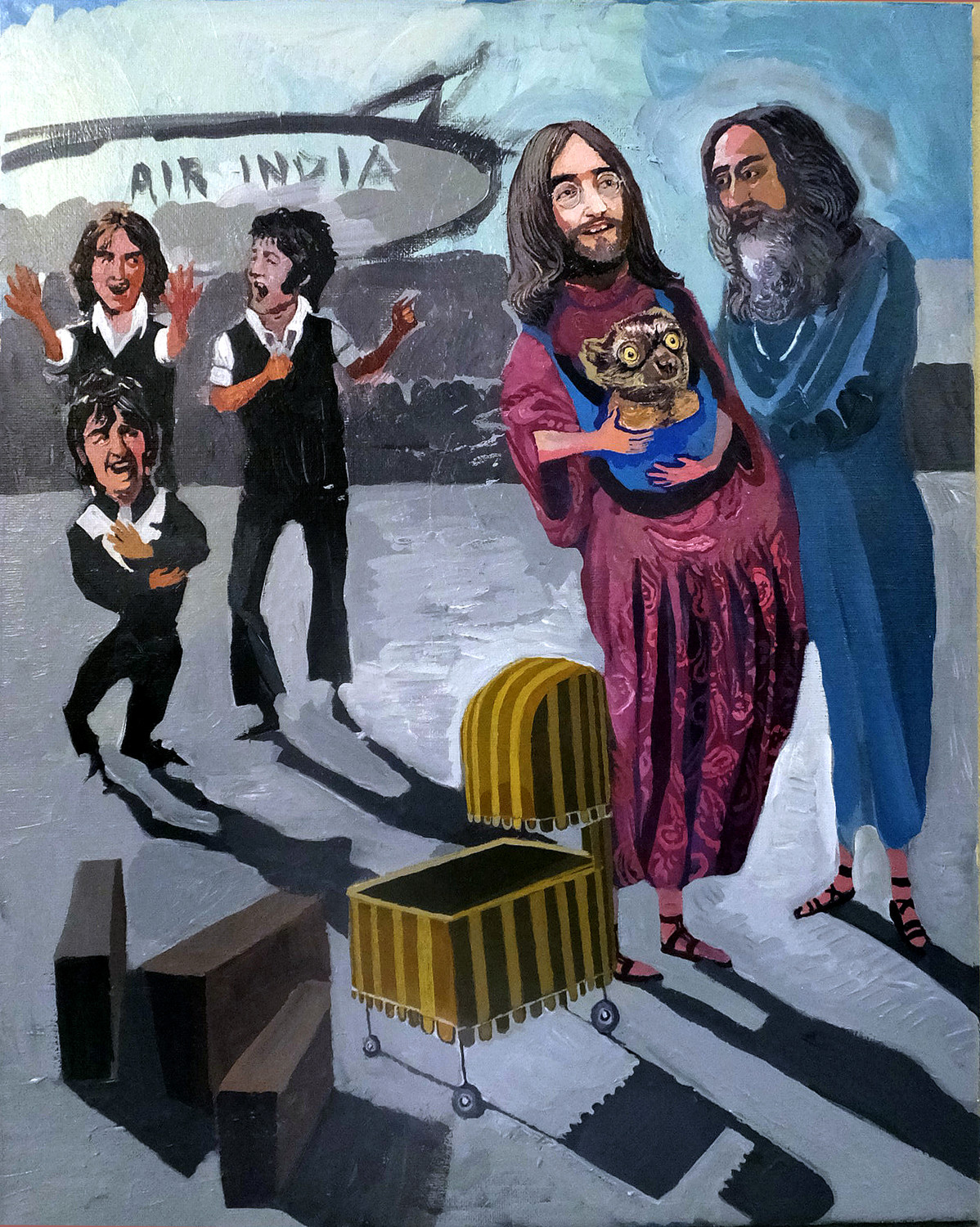 Does my work have value to the majority of people in my culture?

Maybe it does not.

Does it deeply move certain sectors of people?

Does it have value in God’s perspective?

We will explore that question in this article- along with other questions.

One of the problems with the idea that art has value because of beauty is that beauty is not the only criteria which makes art “useful”.

You see...the theory of aesthetics explores the factors which make art “useful” throughout all the cultures of the world.

Being a “Westerner” I will be considering just the Western Philosophies of art in this book., Researchers and Art Historians have isolated at least four major traditional philosophies (or theories) art in our culture. They have been given titles which I will explain one by one. I suggest a book entitled Calliope’s Sisters (A Comparative Study of Philosophies of Art) by Richard L. Anderson for in depth research on this topic.

I assert that simply using beauty as the benchmark for judging all art is a big mistake. One disqualifies a much broader range of artistic experience by setting beauty as the pinnacle for viewing art. Although the inclusion of beauty may be found in all of the theories it is central to only a couple. We all have backgrounds through which we filter our experience. I ask you to look though a new filter as you read and learn.

I ask you to consider the work of Kathe Kollowitz She sketched the horror and pain in the faces of victims of The Nazis in Germany. She was a dedicated Christian artist. To my knowledge, she never captured an image which could be considered beautiful. Yet her art had a large impact on the way people thought at the time.

Now I will synopsize the four main Western Philosophies of art.

1: The Mimetic-theory of art is a Greek-derived term. Think of our words “mine”: and “imitate”. This philosophy states that the purpose of art is to faithfully record what is seen in reality. When I think of this theory I imagine landscape realistic paintings, still life paintings, realistic portraiture or the school of photorealism.

2. The Pragmatic theory of art (which my art about Jesus often falls into) states that the purpose of art is mainly to teach or inspire the viewer in some concept or idea. This type of art can be found in church murals, illustrations, propaganda posters, etc. Pragmatic authors desire for their works to bring abut social reform (think Charles Dickens). Charles Dickens and social Reform in England

3. The Emotionalist Theory of art. “It might be said that if the reality of mimetic art lies in the material and social world, and the truth of pragmatic art lies in the moral, ethical and spiritual realms, then emotionalist theories take as their universe the inner landscape of the individual’s emotions and feelings. (quote: Richard L. Anderson, pg. 211). The Romantic movement began in the late eighteenth century. In current culture, rock concerts, recorded background music in elevators, even television, dancing and movies bring enjoyment to the participant.

4. Formalist Theories of art. This is the latest philosophy or theory of art and is a reaction against the other forms of art. A formalist will often paint abstractly (and so throw off the ties of imitation of anything in nature.. This philosophy also considers pragmatic art to be “preachy”. It diverges from the emotionalists in certain ways as well in asserting that “art is for arts sake” not to conjure up an emotional response. Formalist deny that art has any purpose but that of making the art.

Ever since I began making my own art in junior high school- I’ve been driven to tell stories with my work. Stories about life. Stories which expunge the tough issues from my own life onto a canvas.. When I was a teenager I painted about homeless people, about women as toys and sex objects, about the masks we all wear, about being trapped in a bad drug trip.

This is the way God built me. I take little joy in painting a beautiful landscape (although I have done it- and have pleased the clients in doing so…) I do enjoy painting and sketching the human figure however, God also “built me” to have a keen awareness of people.

As my work progresses I still challenge people to see the world from a different perspective. My Jesus art is arguably the most controversial because is doing exactly that.

Some Christians find it uncomfortable to have a long standing representation of their Jesus challenged. But they need to understand that I am not challenging that image to destroy it but to refresh it. Jesus talked about putting new wine into new wine skins.

This younger generation has an entirely different experience than we have had- and a correspondingly different visual and verbal language. The new wine is the same “old truth” but it is truth for a new time and new people.

I often think about how during the time of Bosch there were plagues and famines and infant mortality. Death lurked around every corner. And so his new wine was “here is heaven- here is hell- choose now because this may be your last day”.

That message is outdated for now.. Life spans are much longer, people rarely die as infants in the Western world. So that message translates as fear and pressuring people into heaven by threatening hell. It repulses people. And yet a few hundred years ago it was the “good news”! How can that be? It’s a simple answer.

These are two different time periods and the people of each generation are the ones who will define what is the central need for them as the good news (gospel) Today I assert it is belonging. Belonging is a central element of the good news that is felt in the heart of every human being as our civilization becomes increasingly splintered apart. I also assert that healing has always been central to the good news of every era and it is being revised in our time. Hospitals are necessary and keep many people alive. But hospitals are also increasingly failing the many wounded and ill people of the world. Only a supernatural God has the answer for an incurable disease.

So the message (and the supernatural power of God to bring the message to reality) that God heals the incurable aids or cancer victim is truly a gospel needed for this time.

Unless we (as artists) can first feel the pain and anxiety , the fear and dreams of the younger generations we will never be able to communicate to them in relevant manners. Our work will be “old school”. It will be passed by as if it were written in a foreign language.

How much attention do we give to a book written in a language which is strange to us? That is how the young people see the art of their elder’s generation.

I write quite a lot about the sub culture of the Christian bookstore and Christian coffee shops. The ultimate symbol of old wine skins is the hand painted rock in many Christian bookstores which says “God is my rock”. "God is my rock" - rocks ! This archaic imagery says it all. It tells me that my generation of Christian artists (for the most part) has little to offer by way of talent, invention, and real intercourse and discussion with today’s culture.

why WAS Christian art from LONG ago SO INTERESTING???